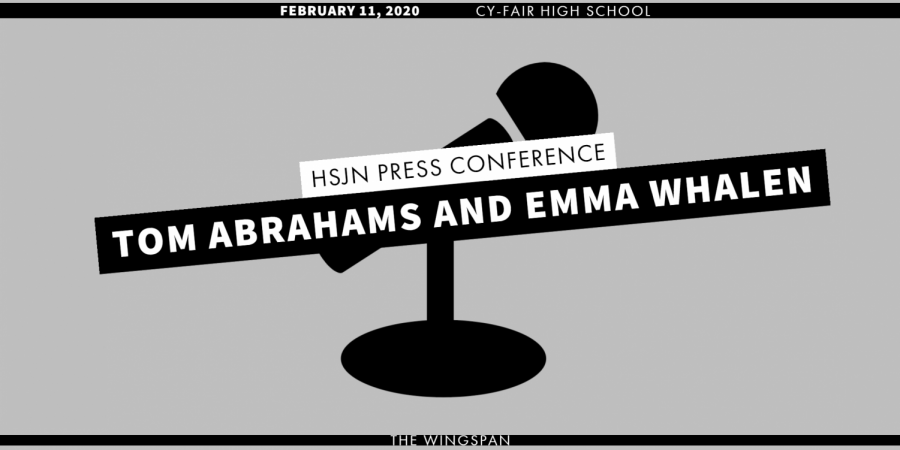 The High School Journalism Network (HSJN) press conference that took place on Tuesday, February 11, featured two special guests, Tom Abrahams and Emma Whalen. The two fielded questions from student journalists from CFISD at Cy-Fair High School and the focus of the conference was centered around the upcoming elections across the nation this election year.

Tom Abrahams, ABC 13 Houston anchor and reporter who has produced and aired five special reports since 2006 including the 2008 presidential election, started the conference by talking about what would happen if a situation like the Iowa Caucuses were to happen, where votes weren’t being counted due to a technical problem with the DNC voting app, and what he’d do in a situation like that.

“Typically you are going to expect an early vote within an hour or so, and if you notice that you aren’t seeing them, then there is probably a problem there,” Abrahams said. “It can be difficult there in Iowa. I think it tends to be a little bit more responsive [in Houston]. Super Tuesday, about a month from now, is part of the national election, it may be a little more difficult, so you have to try and ask for results early, and you can’t let them get off the hook, even if it’s a day later.”

Emma Whalen, a Houston City Hall reporter for Community Impact Newspaper, who reports on weekly City Council meetings, local elections, and neighborhood-level news around the city of Houston commented about getting other sources besides one campaign official.

“It’s almost irresponsible to quote that and leave it in the story without having stuff or something to compare it to,” Whalen said. “So in this example, they are talking about how they are confident and they’ve got this in the bag and everything is fine, but you have the voting returns too so you can put that in the story saying they are X percentage points ahead so we’ll see how it goes. You don’t need to put your own opinion into it, but it’s just kind of that verifying you know.”

Tom Abrahams, who covered the 2018 senate race in Texas between Ted Cruz and Beto O’Rourke, shared his experience from that race and how campaign officials might not be the best source for information.

Abrahams continued to talk about the day in the life of reporting politics in an election year. He described the lack of sleep and chaos that he endured from just two days during the 2016 presidential race when he was invited to report for Ted Cruz during the Iowa Caucus and New Hampshire primary.

“We spent four or five days in Iowa covering a lot of the candidates throughout the state. So I would travel, and my photographer would edit, then we pull over right before my live shot and do the live shot from a city somewhere in Iowa. So we hustled on our last day in Iowa, then got on a plane, probably at 2 a.m. by this time, and flew to New Hampshire,” Abrahams said. “On the flight there, I was working on two news stories for the morning newscast, so I’m writing and my photographer is editing. I think I voiced it in the airport before we took off because I knew it would be too loud on the plane. So we land, and then we have to go live at 6 a.m. and we haven’t gotten any sleep yet.”

It wasn’t over though. Abrahams and his cameraman got about an hour and a half of sleep then had to cover a rally at 11 a.m. just a few hours later. Abrahams claimed that the adrenaline in that situation is what helps him get through the fatigue.

“After that, we were putting together our piece for 4 and 5 p.m. because we were going to South Carolina later, so we edited the footage on the plane,” Abrahams said. “When we landed in South Carolina, we fed it from the van in the airport back to the station in Houston. Then we did our live shot at 6 p.m., went to the rally, put together our piece for 10 p.m., while we were still there and [Cruz] was still talking and then fed it back to the station. As crazy as that was, and as little the sleep we got over those two days, it was a lot of fun.”

Whalen and Abrahams both expressed their excitement for the upcoming elections as both will cover local races until election day on November 3.